Friendship in the Midst of Grief

Have you ever had a moment in your life where you took a step back and marveled at the way God brought someone into your life at the exact moment you needed them the most? Maryann had one such moment two years ago when one of McFarlin’s Congregational Care Ministers reached out to her after her husband, John, passed way, providing exactly what Maryann needed in her life: laughter and friendship. But in order to tell the full story, we have to back up just a few years.

A bubbly student studying for her master’s in education, Joyce Wallace loved to laugh. And she loved to make other people laugh through stories. Ever since she could remember, she and her brother had been collecting funny, anecdotal stories. This was before the days of the internet, so when they wanted to share a story with someone they would call them on the phone or send it in a mailed letter.

Joyce began sending anonymous “Letters of Laughter” to friends and family members to brighten their day and offer them unexpected joy when they opened their mailbox. In one instance, Joyce had been writing to her college roommate’s mother every year for over 20 years, and every year she would hear from her friend how much these letters meant to her mother, especially the extra joy and light they brought to her life when she was ill for several years. Joyce recognized this gift of joy and encouragement God had given her and continued to find ways to cultivate that gift.

Joyce’s faith was always important to her but growing up Catholic had left her feeling distant from her faith in God. She saw church on Sunday mornings as a tradition for tradition’s sake. It wasn’t until the late 1980s that she started coming to McFarlin with her husband. It was here where she encountered a community that was alive in their faith, recognizing and appreciating as an educator and mother to three children the central role that children played at McFarlin. They jumped right in and engaged in this faith community, joining the Searchers Sunday school class, and Joyce began volunteering to help lead Children’s Sunday school classes.

It was around the same time that a new couple visited the Searchers class. Looking for a church home, Maryann and her husband wanted to find a place where they could deepen their faith in a real way. Maryann had also grown up Catholic but really didn’t identify herself as a very spiritual person. They visited McFarlin and found a Sunday school class that felt like home to them. “It was just a loving family really,” Maryann remembers. “Everyone welcomed us in and we never even visited another class.”

Though Maryann and Joyce shared many commonalities and were even in the same Sunday school class, they passed like ships in the night on Sunday mornings. While Joyce was volunteering in Children’s Sunday school, Maryann was attending the Searchers class. When Joyce took a break from volunteering, Maryann wasn’t able to attend Sunday school for a while. Even on the few occasions they were there at the same time, the opportunity never arose to get to know each other. But as the Bible reminds us, God’s timing is perfect, and the opportunity for friendship would arrive soon. 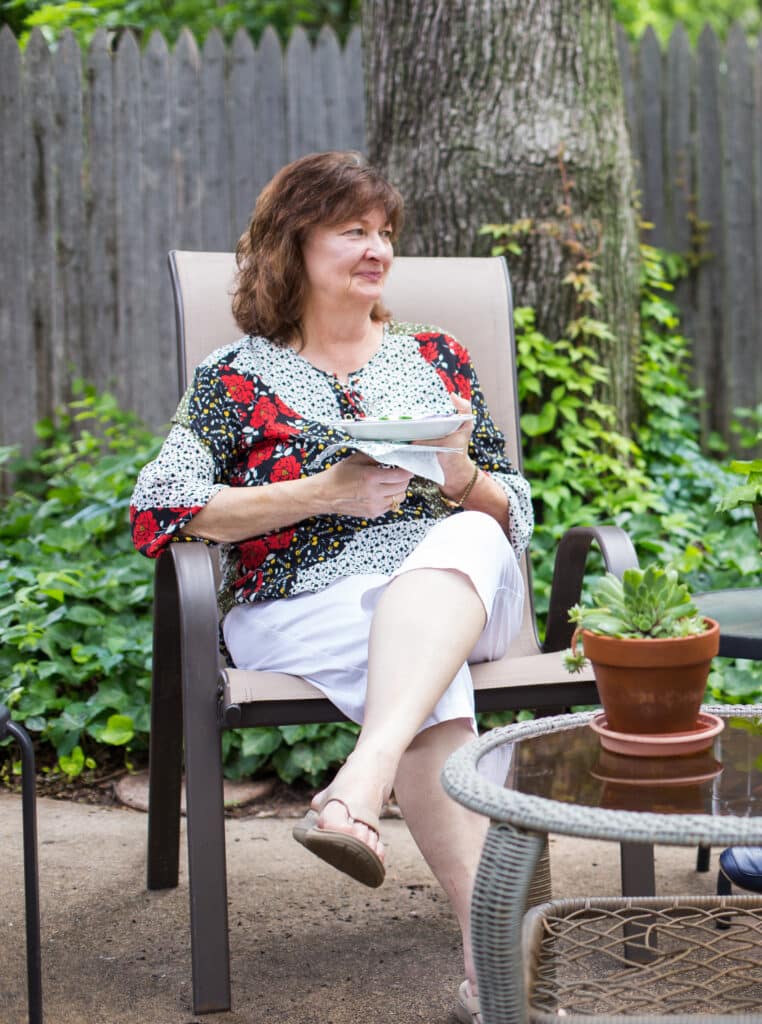 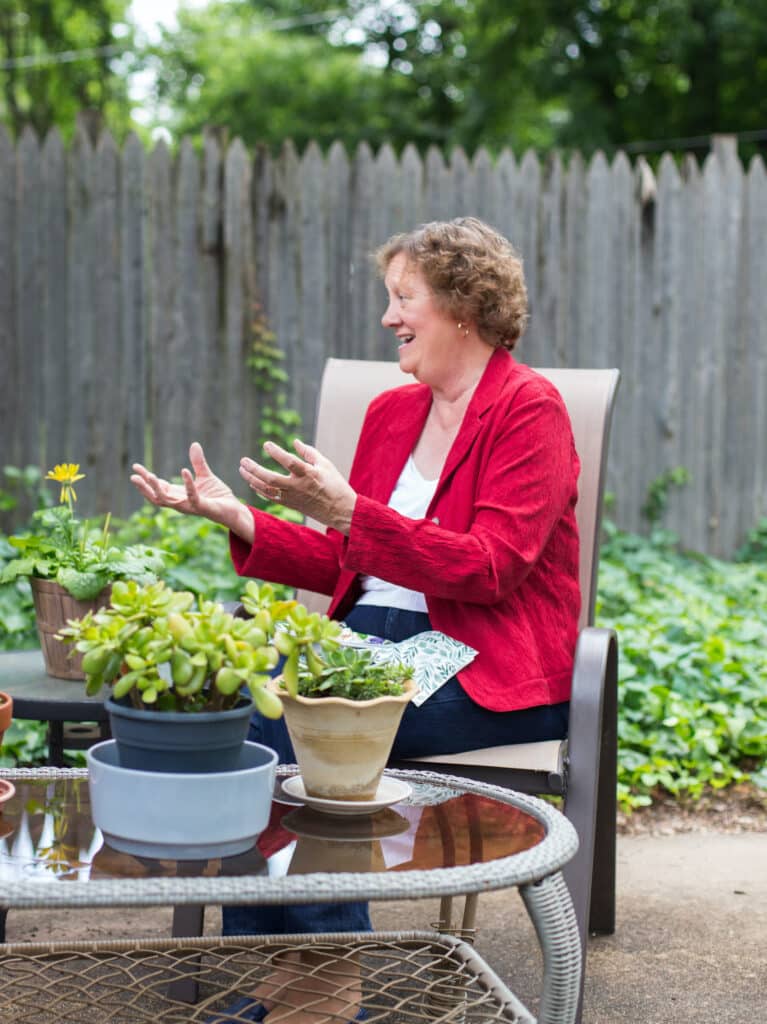 “Our church is so big, and the pastors can’t do this all by themselves ... and it’s a way for other people in the church to know that McFarlin cares.”

One day in 2013 McFarlin’s former Director of Care Ministries Jane Cook called Joyce to offer her a spot on the very first Congregational Care Team at McFarlin. This group of McFarlin members would be trained to reach out to people in the congregation experiencing an urgent situation, tragedy or a life celebration. “Our church is so big, and the pastors can’t do this all by themselves,” Joyce explained, “and it’s a way for other people in the church to know that McFarlin cares, we really do.” With her children grown up and out of the house and having extra time on her hands, Joyce saw this as an opportunity to help others and continue sharing her gift of joy and encouragement.

In 2015, Maryann and John received heartbreaking news that John was diagnosed with pulmonary fibrosis and would most likely only live five more years. Being avid world travelers, they did everything they could to make the most of the time John had left, but when the pandemic hit, John had declined to the point that it was dangerous to leave the house or allow anyone but Maryann inside the house. The days turned to weeks, which turned into months, and after John passed way, Maryann needed comfort and hope. “At that time in my life, at that moment in time, my life felt like it had ended,” Maryann shared tearfully.

Almost immediately after John passed, she received a call from her Congregational Care Minister (CCM), and it was Joyce. Joyce’s bubbly and joyful personality breathed life into Maryann.

After an hour on the phone, Maryann knew she would be okay. “We really didn’t know each other, but we were on the phone together for over an hour,” said Maryann. “We laughed together, cried together, we joked together—you would have thought right then that we had been best friends forever and ever and that’s how God connected us—right there, on that phone call.”

Over the next few months their friendship flourished, and Maryann felt the constant support that Joyce gave her through phone calls, mailed cards, funny stories and spiritual encouragement. Joyce made it a priority to regularly show up at Maryann’s door to drop off colorful packages filled with homemade pies, cookies and other baked goods.

“I really thought that my life that I knew was at an end, and God told me otherwise. My life is full, and this is my spiritual adventure.”

Fall turned to winter, and Maryann’s first Christmas without John was going to be hard. The one beloved tradition Maryann really cared about was the stocking that John would fill with individually wrapped gifts for Maryann.

A couple of days before Christmas she received a knock at the door. She opened it to see the bright and shining smile of Joyce Wallace, and in her arms was a stocking, stuffed to the brim with individually wrapped gifts. Maryann was so overwhelmed she burst into tears and shared with Joyce how this was a special tradition between her and John and how she never thought she would ever receive a stocking like that again. “God knew that this was my only special gift at Christmas,” Maryann shared, “and I thought I would never have another stocking, and it was so precious. I was just in awe that this happened—it sits on my fireplace every year now.”

God invites us to be part of bringing the kingdom of God to earth in ways we can’t even imagine. Because Joyce said yes to being a CCM, the God of all comfort and joy was able to use Joyce to bring Maryann out of despair and into the hope that Jesus offers. In fact, Maryann gave Joyce a taste of her own joyful medicine this January when she said yes to taking on the role of caregiver after Joyce broke her collarbone, bringing her food and gifts and continuing those hour-long phone calls full of laughter and joy.

Joyce and Maryann are deepening their friendship even further by planning a trip to Jerusalem together. Maryann’s faith has grown immensely during this time through her friendship with Joyce and with the support of McFarlin’s Care Ministries. “I really thought that my life that I knew was at an end, and He told me otherwise,” Maryann said. “Not only is it not at an end, but it’s going in the opposite way. My life is full, and this is my spiritual adventure. I’m not only on it with God, but also with Joyce.”

If you’d like more information about being part of our Congregational Care Ministry program, please contact our Director of Care Ministries, Stephanie Miller at smiller@mcfarlinumc.org or 321-3484 ext. 115.

Virtual
11AM Modern
11AM Sanctuary